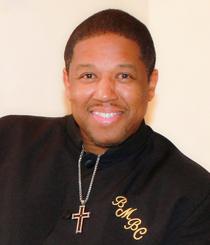 ​The Church that seeks to serve ​the whole community​​

​Pastor Ralph Quincy "Chip" Moore, II was born in Brooklyn, New York to Ralph Moore, Sr. and the late Bonnie R. Moore. Although, born in New York, the family relocated to Memphis, Tenn. where his years of spiritual grooming and awareness was refined as a member of Friendship Baptist Church.

From Brooklyn to Memphis and Memphis to Hampton Roads the Way to his call has been challenging. Yet, the Lord has made a way. Upon arriving in Hampton Roads, he became very involved in the work of the Lord. He worked as a radio personality on a local gospel radio station and became engaged in many areas of various music ministries. Pastor Moore fought and ran from his purpose, but God knew what was best for him and didn't let him go. In his words, "Matthew 6:33" took a present Moment meaning . . . God said, "SEEK ME FIRST - NOW!" As he began to see his way, he also found the woman that would walk with him. For more than 27 years he has been blessed in matrimonial harmony with the former Melva M. Hart and they have four children, Erika, Nicole, Darius, Angel and three grandchildren Corbin, Harmoni, and Israel.

Pastor Moore has earned a Bachelor of Science degree in Business Administration from Strayer University, his Master’s degree in Christian Counseling from Liberty University/Theological Seminary, and is currently pursing a Doctorate of Theology at the Carolina Theological Institute and Seminary with an inference in Christian Leadership and Counseling.

He has been a part of the Bethlehem Missionary Baptist Church for more than 28 years. He began as an invited worshipper to assist the choir, but discovered a deeper calling. He was called to the Diaconate Ministry and faithfully served; however, one afternoon during Sunday worship, he heard the voice of the Lord speak to him calling him to minister the gospel. His initial sermon was entitled, "Master, Can You Use Me?" The Lord has since called him to Pastor. And with overwhelming support, Rev. Ralph Quincy “Chip” Moore was called to Pastor the church on March 31, 2009 and now serves as the twelfth pastor. His pastoral tenure is now at 10 yrs and pressing forward.

Pastor Moore and Evangelist Moore are founder and co-founder, respectively of “Tears of Holiness Ministry” which focuses on rebuilding broken believers to renewed hope and fellowship in Jesus Christ! Pastor Moore is seeking to publish his first book ‘Destination Purpose.” “Destination Purpose” is a literary instructional work that understands the difficulties of becoming effective through the challenges of consistently overcoming, while never giving up or believing on the predestined direction of your life.

In addition to his Pastoral duties and other ministerial pursuits, Pastor Moore is employed full time with The Port of Virginia (Virginia International Gateway) as an Operations Manager.

Pastor Moore’s sincere heart's desire is to bless the Lord at all times and for others to realize that the same God that blesses him...is the same God that sits high and looks low ready willing and able to open up the windows of heaven and to pour YOU out an enormous blessing.​